A sexual reference book like no other
Everything you always wanted to do but were afraid to say
The Book
Samplers
Reviews
The Author
Buy the Book
Mini-eBooks
Free eBooks
Buy "The Big F" mini-eBook for only $1.99 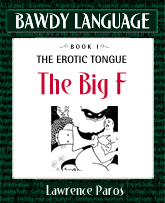 I was walking along this fucking fine morning,

and I meets up with this fucking girl,

fucking lovely she was,

so we gets into fucking conversation,

and I takes her over a fucking gate

into a fucking field,
and we has sexual intercourse.

- An Australian "rigamarole" quoted by Wayland Young in Eros Denied, 1968 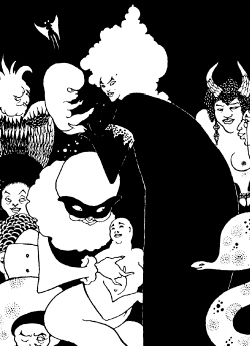 n the beginning there was the act. It was damn good fun but also somewhat scary. It struck fear and generated awe in those who experienced it. They surrounded it with mystery and circumscribed its use. When they later found a way to express themselves, they transferred the dread and awe to the word itself. The word closest to the act which reminds them most dramatically of their discomfort is the Big F, more commonly known as fuck.

Whence came fuck? Nobody really knows. Some think it derives from the acronym for "For Unlawful Carnal Knowledge," maintaining that it was a form of legal shorthand for recording cases of rape and sodomy. Some trace it to the Puritan Massachusetts Bay Colony; others to medieval times. Further investigation, however, shows this hypothesis to be just so much fucking nonsense. There is no substantive evidence to support these claims, and it's further unlikely the word was ever an acronym given the many variations in its spelling.

There is no consensus among serious students of the language. They used to believe that the word originated with the French foutre, or the Latin futuere, a theory now pretty much discounted.

If etymologists appear somewhat aroused by the topic, it's only because there are those who find fuck's origins in the German ficken, to "strike, beat, knock, or bang," a theory that converges nicely with the fact that men today hit on a woman (make sexual advances). Over the years, synonyms have included thump, smack, batter, stuff, punch, ram, jolt, cramp, poke, and wallop - leaving little doubt as to how men conceived the act. Ficken's roots are the Indo-European peik, meaning "enmity, evil, maliciousness,"