A sexual reference book like no other
Everything you always wanted to do but were afraid to say
The Book
Samplers
Reviews
The Author
Buy the Book
Mini-eBooks
Free eBooks
Buy "The Sporting Life" mini-eBook for only $1.99 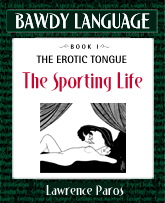 Now that we have agreed on the principle, we must merely be haggling over the price. 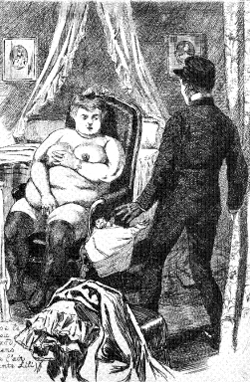 What else would she be doing? Maybe peddling her hips, fluttering her skirt (c. 1850), trading on her bottom, selling custom-house goods (mid 18th-early 19thC), and hawking her meat (19th-20thC). "Get it while it's hot!"

As a well-rigged frigate, she could be found carrying the broom up (c. 1820-90), from the time when it was customary to attach a broom to the masthead of a ship that was up for sale.

Some still missed the boat. When a judge asked the prisoner standing before him, "What are you, young lady?" she replied, "I am in the way of life, your honor" (c. 1823, Grose). Once she was on the game (17thC) or in a mode of living (movie news-reel: News of the World). Today, she's in the life or into the game. Don't trivialize it. Just because it's a game doesn't mean it's not a serious matter. As a distinguished pimp once put it, "man, the game is deep!"

'Tis a pity she's a whore, but them's the breaks of the game. She's been one since before the twelfth century (Old English hore). We once considered the word polite, a euphemism for another expression long since forgotten. In fact, it's a relative of the Latin carus for "dear." But like all good euphemisms, it would in time become common, vulgar, and unacceptable.

Many were uncomfortable in her presence. In 1833, Noah Webster sounded an uncertain strumpet (c. 1327, from the Latin strumpum, "dishonor"), bowdlerizing the Old Testament by driving all whores to cover. Hoores had been present in the first English edition of the Bible in the fourteenth century, but Webster thought it best to replace them with lewd women and harlots.

More recently, we'd rather not speak of her at all. In 1934, H. L. Mencken noted how New York newspapers reviewing the play Within the Gates handled the part of the Young Whore. One newspaper referred to her as the Young Prostitute; a second, as the Young Harlot; the third, as a girl who had gone astray. The fourth simply avoided any mention of her at all by ignoring the entire cast.

We've tried to cushion her impact, promoting the British pronunciation hoor and the inner-city ho, and disguising her in rhyming slang with Jane Shore, sloop of war (19thC), and two-by-four (early 20thC, U.S.). But nothing seems to work. In England, you'll still find her blatantly whoring along the dilly (Picadilly Circus). In the States we still have the hard-leg whore, street-hardened and used up "with millions of miles on her." Tuned up for yet another trip around the square.