A sexual reference book like no other
Everything you always wanted to do but were afraid to say
The Book
Samplers
Reviews
The Author
Buy the Book
Mini-eBooks
Free eBooks
Buy "Spare Parts" mini-eBook for only $1.99 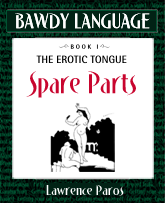 The woman's breast nourishes the child and
gladdens the father 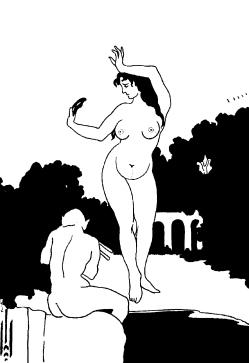 Drebin: "Lt. Frank Drebin of the Police Squad." Monique: "Is this some kind of bust?" Drebin: "Very impressive, but we need to ask you some questions."

Our treatment of women remains incomplete. While rummaging about through love's attic you'll find the greatest assortment of odds and ends since the Olde Curiosity Shoppe: Nicely shaped jugs (early 20thC), hand-crafted love handles and knockers (both 20thC), a pair of (Cupid's) kettledrums (c. 1770-1850), some restful chest and bedding (c. 1785, nautical) and, for the autoerotic set, a pair of headlights (20thC). All neatly arranged on a rack (1990s).

Upon closer examination, you'll see that this mixed bag from the past consists of nothing more than breasts. If it seems like breasts have been around forever, you're not far off. They bounced their way into the language about the year 1000, coming from the Indo-European bhreus, "to well or sprout," starting life as an Old English breast and a Middle English brest before finally settling in to the form we know today.

But it's the bosom, a word that appeared about the same time that's proven more acceptable. According to its ancient Indo-European origins, the bosom's nothing more than the space between the arms. Nothing much, but you'd have to admit that it filled the space nicely. Around the middle of the nineteenth-century, breasts fell out of favor, and "nice" people stopped referring to them.

When you were invited out for turkey dinner and you wanted to express your preference for white meat, you always asked for turkey bosom, never the breast.

Over time, the breast came to be perceived as increasingly impolite to the point of being considered savage, and the bosom as refined and gentile. Bosoms had a brief, wild fling as bazooms (mid 20thC), before ultimately reverting to their conservative character and traditional spelling.

As acceptance of breasts declined, other substitutes were tried, including the top, the torso, and the chest. The chest was adopted by many, including a twentieth-century stripper who promoted herself and her wares as "Evelyn West and her treasure chest." But such efforts proved a total bust, a general term for the upper part of the body including the head, shoulders, and upper chest when speaking of a sculpture, but reduced to the breasts when referring to a woman.

Breasts, however, wouldn't take it lying down. They fought back valiantly, finally making a remarkable comeback in the 1920s. Today, they are quasi-respectable. They still occasion a twinge or two when mentioned publicly, but for the most part appear to be holding their own.